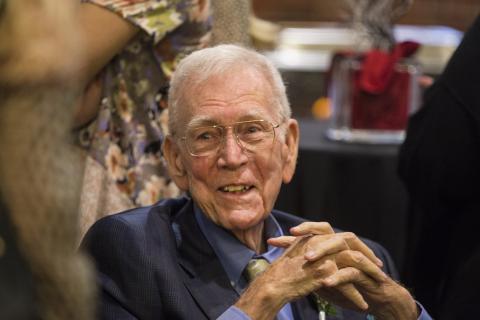 A longtime business and community leader, B.I Moody III is an avid supporter of his alma mater.

Moody graduated from Rayne High School and attended Auburn University. His college career was interrupted by service in the United States Navy during World War II where he served in the Pacific aboard the aircraft carrier USS Randolph. After the war, Moody returned and enrolled at Southwestern Louisiana Institute (SLI), now University of Louisiana at Lafayette, where he earned a Bachelor of Science degree in accounting in 1949.

After earning his degree, Moody became a founding partner in the CPA firm of Moody, Broussard, Poché and Guidry with offices in Crowley and Lafayette. He later served as President and Chief Executive Officer of Chart House, Inc., a public company operating Burger King hamburger restaurants in Louisiana, Illinois, California, Virginia, and Texas, as well as Chart House steak restaurants in California, Cork & Cleaver steak restaurants located in Colorado, and Luther's Barbeque, domiciled in Texas.

Additionally, he served as Chairman of the Board of First National Bank of Lafayette, The Moody Company, and Louisiana State Newspapers. Moody has served on the boards of directors of many other companies including First Commerce of New Orleans, Riviana Foods Inc., Celeron Oil Company Inc., Quantum Restaurants,

The UL Lafayette Alumni Association honored Mr. Moody in 2006 for his commitment to the success of the University and his dedicated service to the surrounding community. His service on boards of directors include Rayne State Bank & Trust Company, First National Bank of Crowley, Acadia Savings & Loan Association, Coastal Chemical Company, Inc. of Abbeville, Riviana Foods, Inc. of Houston, First Commerce Bank of New Orleans, Celeron Oil Company, Inc. of Lafayette, and Quantum Restaurants, Inc. of New York. He also served as President of the Greater Crowley Chamber of Commerce and Chairman of the United Givers Fund of Acadia Parish.

Moody was inducted into the Louisiana Political Museum’s Hall of Fame in 2016. He was honored by the Moody College of Business with an honorary doctorate in Fall 2017.

At their lifelong residence in Crowley, he and his wife, the former Thelma Hebert of Rayne, raised nine children who continue the legacy of corporate and civic duty in Acadiana and beyond.

UL Lafayette broke ground for construction of Moody Hall in August 2003. The project included the construction of a $9.24 million, three-story structure for the College of Business Administration. Classrooms and computer labs used by students are located on the ground floor, along with a 220-seat auditorium, which can be divided into two 110-seat auditoriums. Eight 50-seat seminar rooms serve as classrooms.